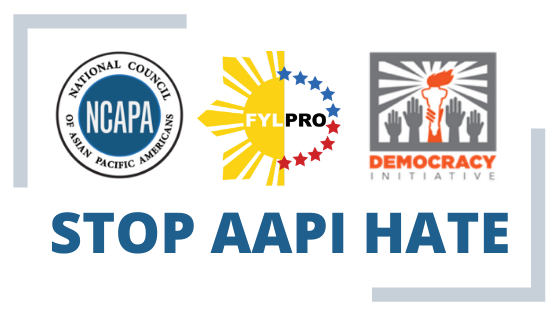 Filipino Young Leaders Program (FYLPRO) joins more than 450 organizations to denounce the racist attacks and discrimination against Asian Americans amid the COVID-19 pandemic.

FYLPRO has signed onto a letter of support for H.RES. 908, introduced by Representative Grace Meng (D-NY) which has 131 cosponsors and condemns all forms of anti-Asian sentiment related to COVID-19.

“Signing onto this letter amplifies our voices as a network of Filipino young leaders dedicated to supporting our community during these challenging times. This is a direct way of voicing grassroot concerns to the grasstops,” said FYLPRO Board of Director and NaFFAA Capital Region Chair Krystle Canare. “We’ve gone from being the so-called model minority to yellow peril – let us not be the silent minority too. Let’s hold ourselves accountable to standing against hatred and honoring our organization’s guiding values of integrity, collaboration, and compassion.”

Since its creation in 2012, FYLPRO’s core purpose has been to:

In response, FYLPRO alumni from across the nation have held town halls, news conferences to raise awareness, including Board of Director Tony Delarosa who conducted a national dialogue on Anti-Asian Racism for Teach for America.

“According to the organization Stop AAPI Hate, recorded hate crimes towards Asian Americans have surpassed 1,500 people. During this time where Anti-AAPI rhetoric and violence continues to rise so does division to our most marginalized groups. We need a way of being that reminds us of collective solidarity across communities of color like Isang Bagsak,” Delarosa said. Across the nation, FYLPRO alumni are joining in arms with other organizations to take action against the hate. Isang Bagsak is a framework for creating more allies and co-conspirators during such an unprecedented time.

As Secretary of the Asian American Commission of Boston (AAC), Commissioner Philjay Solar (FYLPRO ‘19), alongside AAC members, legislators, Massachusetts legislators, and advocates held a press conference at Boston City Hall on March 12 to publicly condemn attacks, xenophobia, bigotry, and hatred that Asian American and Chinese American communities have experienced in the wake of the COVID-19 outbreak. Next month, Commissioner Solar will meet with the Massachusetts State Attorney General’s Civil Rights Division to discuss resources needed to support the AAPI community.

Over social media, Dr. EJ David (FYLPRO ‘16) shed light on the nuances of the current racism faced within the AAPI community. According to Dr. David, what the data shows is that beyond the coronavirus-related racism. Filipinos experience different kinds of stereotypes and racism such as being called names, harassed, threatened, getting poor service in restaurants and stores, being denied promotion, are more commonly experienced by Filipinos overall, so those kinds of stereotypes and racism affect us more, and they capture our racism realities better than COVID-related racism.

The COVID19 pandemic has profoundly impacted our communities in unspeakable ways. It’s in these uncertain times that we have to uplift and support each other in the fight against anti-Asian discrimination and xenophobia.

The Filipino Young Leaders Program (FYLPRO) is a 501(c)(3) non-profit organization of high-performing, next-generation leaders that have a passion for advancing the Philippines and the Filipino people.

FYLPRO was established in 2012 by the Philippine Embassy in Washington DC in cooperation with the Ayala Foundation Inc. (AFI) to annually identify outstanding young professionals in the Filipino communities across the United States and provide the delegates with invaluable community, business, and government insights and access to distinguished network captains of industry and government.