FYLPRO was created 8 years ago because the Philippine embassy deemed it was important to make sure our young leaders are taking up space at the table, especially in conversations about the Filipino community. The program was designed to search the nation and develop a pipeline of leaders who are change-makers in their communities.

As you know, selected delegates experience a week-long, all-expense-paid  immersion program in the Philippines, which involves meetings with top-level officials and captains of industries. But in order for this program to be effective, FYLPRO delegates must ensure there is continuity and life after the program.

In essence, the network and circle of influence for the Philippine consulates across the country significantly grew through FYLPRO. And we are here today to remind you of this resource, because we share similar goals for our communities.

Now with 84 members in the alumni network, the MOU may be revisited for improvements in 2022. 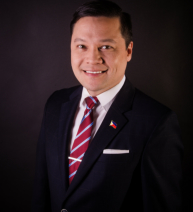 FYLPRO’s goal in 2020 was Transformation: transforming the alumni, the organization, and the community. Due to the unexpected COVID-19 pandemic, FYLPRO not only transformed internally, but adapted and responded externally to the pandemic through increased service to our Filipino and Filipino-American communities.

Starting with its board elections in January, FYLPRO had a record number of active alumni -- 56 out of 84 (or 67%) -- due to a virtual town hall and increased engagement in the election process. This renewed alumni engagement raised over $5,000 for FYLPRO through membership dues alone. The Executive Committee also launched a survey to capture current alumni information and updates on their legacy projects and other community activities.

In 2020, FYLPRO also focused on internal organization and increased efficiency through streamlining processes, developing and implementing new policies, creating a robust committee structure, updating its bylaws, and launching a new website. These efforts also led to the 2021-2023 strategic plan for the organization.

Due to the COVID-19 pandemic, FYLPRO’s regular 2020 event schedule was canceled, including the FYLPRO Summit in March and the annual Immersion Trip in November. FYLPRO pivoted and re-focused its efforts to supporting community projects to assist our kababayans affected by the coronavirus. In May, FYLPRO officially launched its COVID-19 Task Force to raise funds, apply for grants for the first time, and help make a positive impact in Filipino and Fil-Am communities through relief and recovery projects. In March, FYLPRO launched our virtual Tsismisan Talks to promote participation in the U.S. Census and voter registration, but then later expanded these topics to include areas in our Fil-Am communities affected by COVID-19, such as small businesses, caregivers and hospitality workers, and the education system. The Tsismisan Talks resulted in over 40K total video views throughout the year. 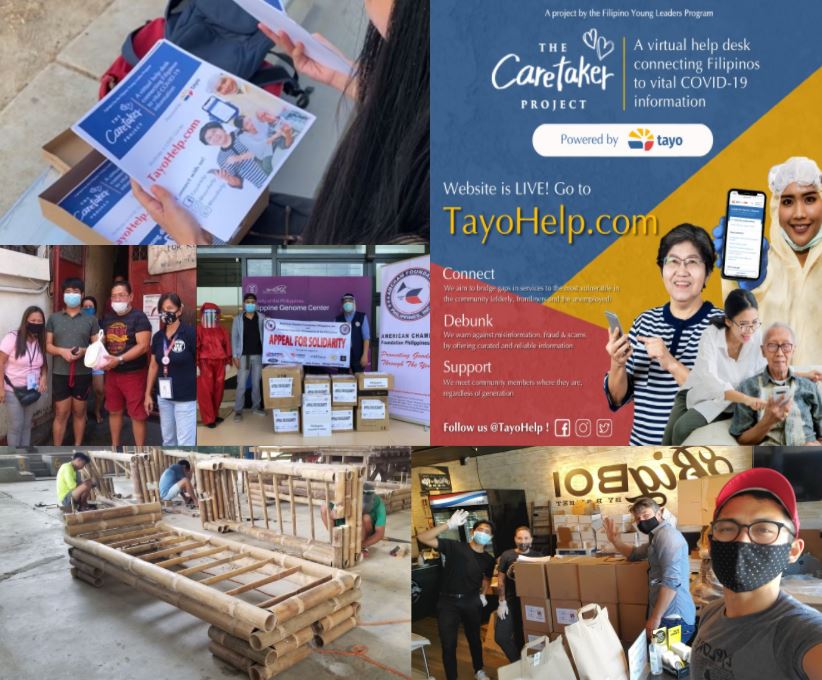 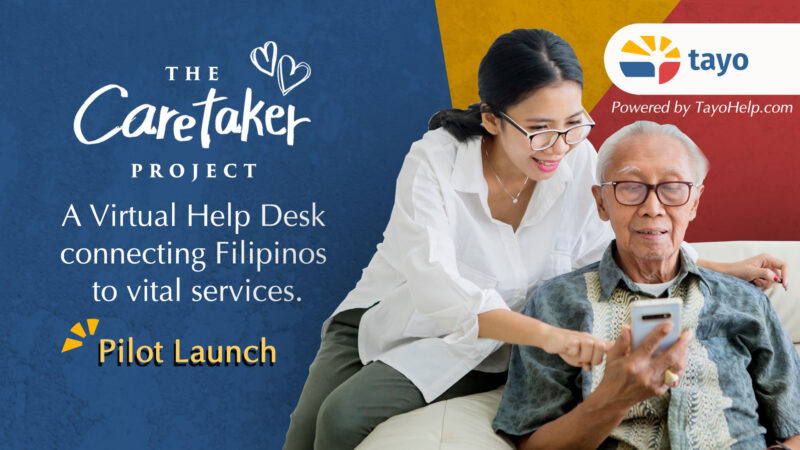 The Caretaker Project, funded by a Booz Allen Foundation Innovation grant, is intended to connect Filipinos with vital, culturally relevant services; debunk misinformation; and improve collection of data to better serve the community. This project aims to fill gaps in services for the most vulnerable social groups — seniors, frontline workers, and the unemployed. Tayo features a mobile friendly resource that includes the most frequently asked questions around COVID19 and its impact on health, housing, transportation and other vital services. Tayo launches in the project pilot city, Los Angeles, where there are about 500,000 Filipinos. 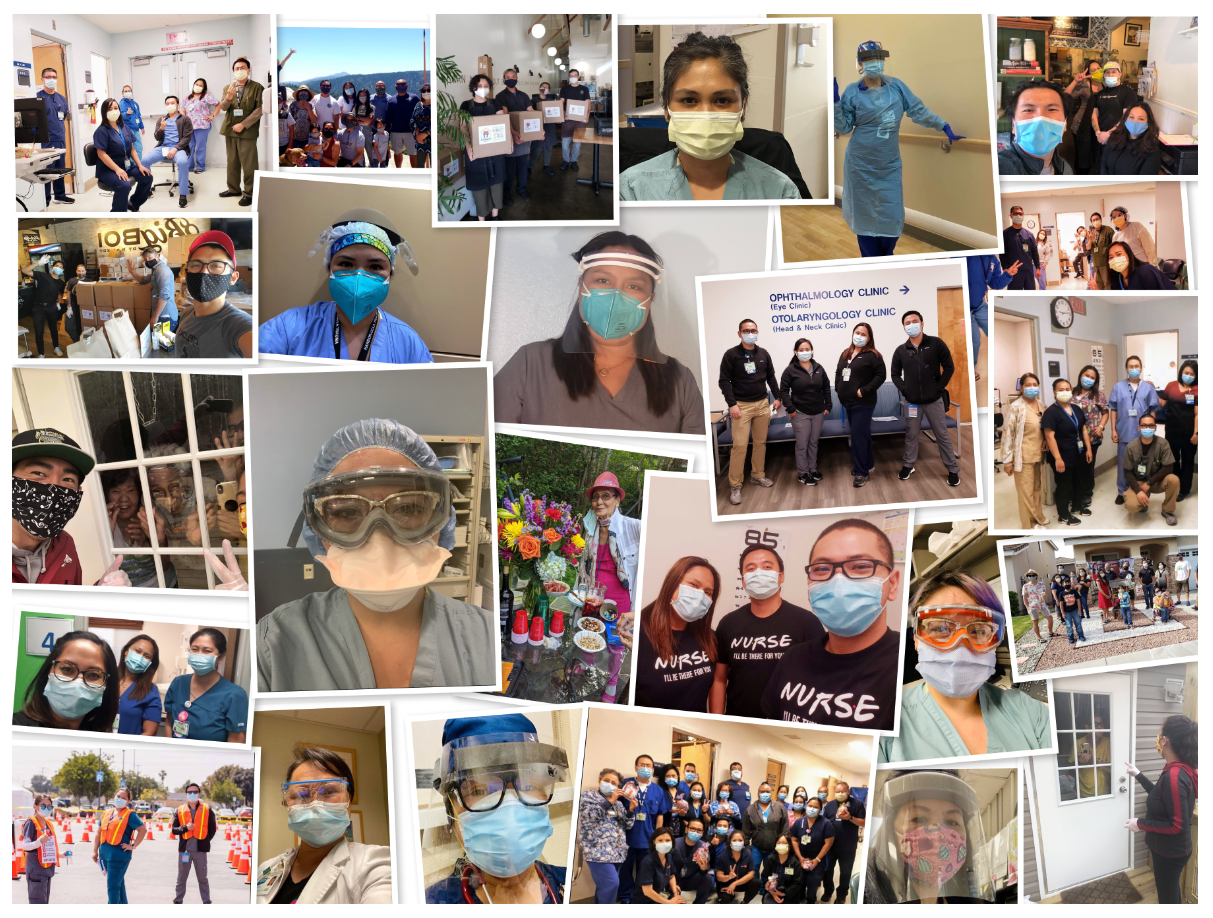 Five years since FYLPRO established its 501(c)3 non-profit status, the organization re-envisions its future and urges participation from alumni, partners, and community allies.

With its signature Immersion Program to the Philippines canceled this year due to the pandemic, FYLPRO magnifies its efforts to better serve its growing alumni and the community in general with a three-day Strategic Planning Workshop on June 28, July 12, and July 26.

Here are some highlights:

FILIPINO YOUNG LEADERS PROGRAM (FYLPRO) is a network of high-performing, next-generation leaders who advance the Philippines and the Filipino people through their advocacy and expertise in various industries.

We continually expand the pipeline of Filipino young leaders in the diaspora. By connecting them to the motherland, we foster collaborative multinational relationships that create innovations and support the socio-economic progress of the global Filipino community.

A thriving future for the Filipino people built upon the strength of our Filipino identity, our global community, and our connections with the Philippines.

In the coming years, FYLPRO will focus on developing these four main areas of improvement:

Because we have a shared vision for the Filipino community, it is prudent to work together to achieve our goals. Below are some past examples of events we have co-hosted, or speaking engagements the Philippines Consulates have invited FYLPRO to. 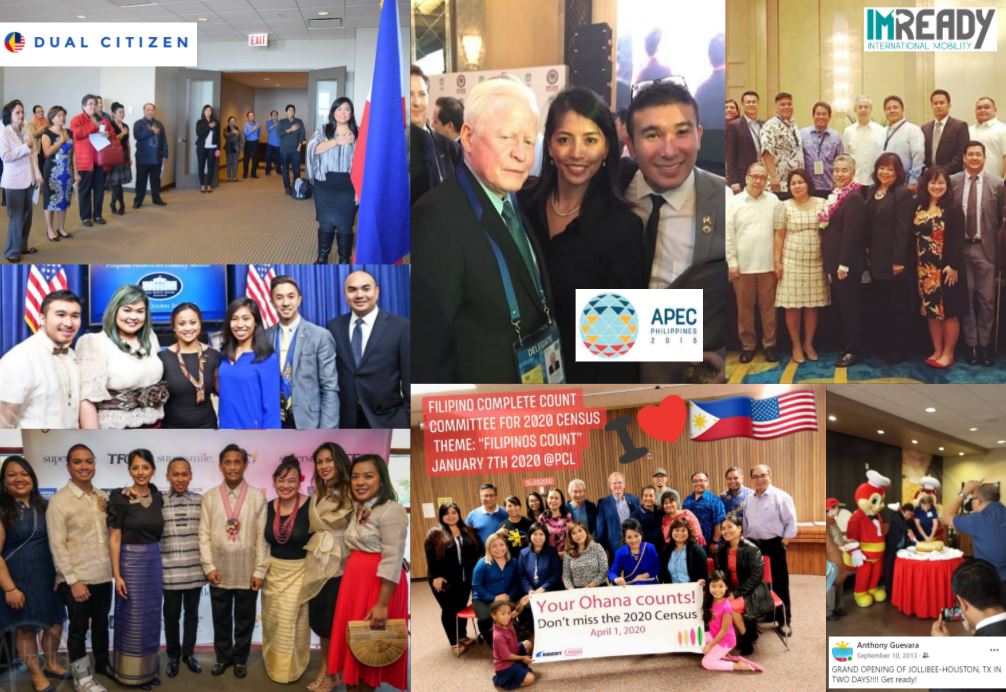 Other Ways to Partner, moving forward 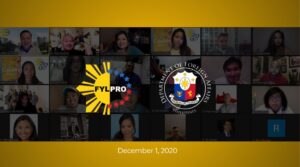 To get to know FYLPRO Alumni, read their bios here.

Below are some highlights of 2020: 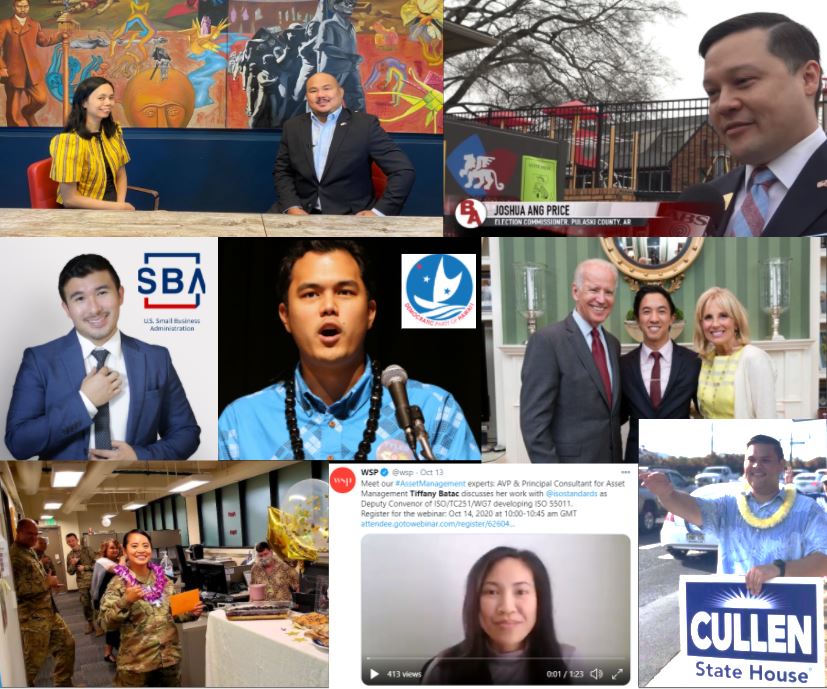 •  FYLPRO 2020 President, Joshua Ang Price, became the first Filipino-American to be elected as Election Commissioner for Pulaski County, Arkansas and is 1 of 4 AAPI elected officials in the state of Arkansas.

•  Tyler Dos Santos-Tam was elected in July 2020 as Chairman of the Democratic Party of Hawai’i and served as the Chairman of the Biden Campaign in Hawai’i. US President-Elect Joe Biden's campaign Coalitions Chief of Staff Jason Benjamin Alinea Tengco was also instrumental in running a historic campaign.

•  FYLPRO 2020 Secretary Char McGinnis, was named Deputy Director for the Commander’s Action Group at Headquarters, Pacific Air Forces and recognized as Field Grade Officer of the Quarter at the Command Section.

•  FYLPRO Board Member Tiffany Batac, was internationally elected as Convener for the International Organization for Standardization (ISO), responsible for the consensus-building of more than 35 countries in the development of the next international standard on asset management, ISO 55011, designed for governments and public policy authorities worldwide. 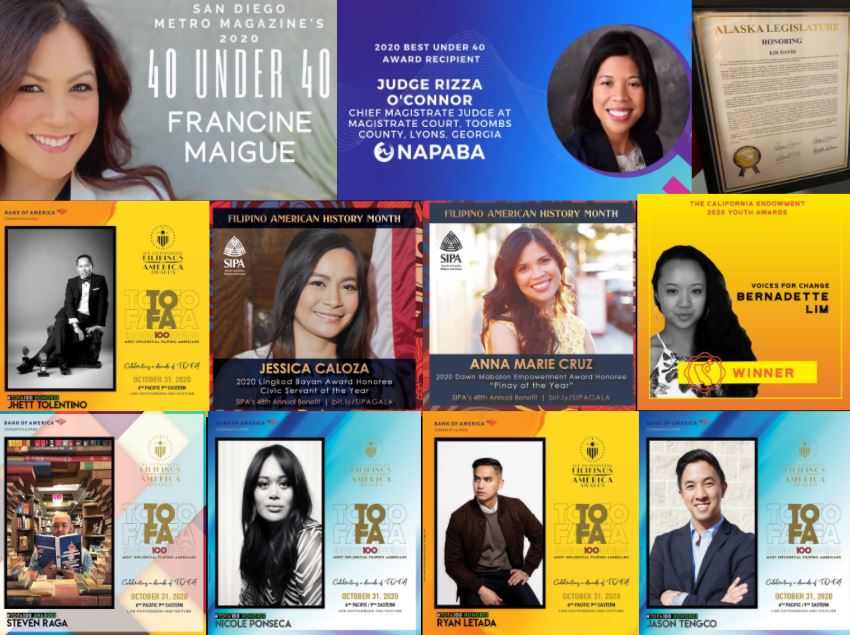 •  Dr. Cat Luib was recognized with the 2019 Hiyas Award for Outstanding Contributions in Filipino Traditional Medicine. She also continues to share her knowledge in SuyoMano.

•  Bernadette Lim was one of the recipients of the 2020 California Endowment Youth Award, under "Voices for Change Award."

•  Jhett Tolentino and Ryan Letada were recognized in the list of 75 Most Influential Filipino-Americans (MIFA) of 2020!

•  San Diego's Metro Magazine recognized Francine Maigue in their 40 Under 40 list this year!

•  Nico Barawid is making strides with his new venture Casai.com!

•  Kit Zulueta Furukawa was featured in March in the Filipino Chronicle as one of “Six Pioneer Pinays in Hawaii.”

•  Actress Meriden Villanueva starred in the action-comedy FILIPINO-AMERICAN FEATURE FILM Lumpia with a Vengeance, which premiered at the Hawai‘i International Film Festival on November 7.

•  The Alaska Legislature honored and recognized E.J.R. David for his countless contributions to the community. 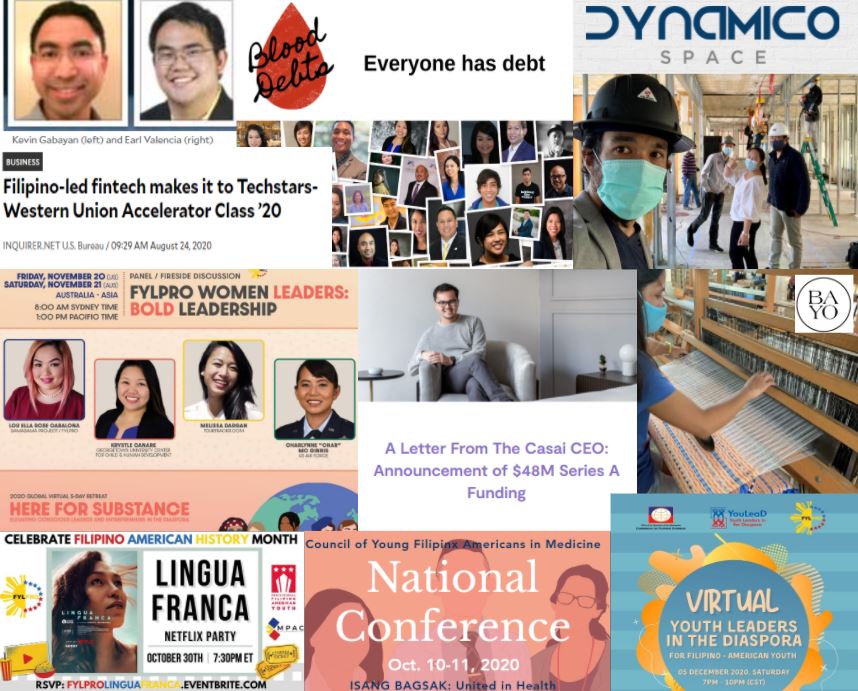 •  Blood Debts, a podcast and multimedia project was launched in October by Leezel Tanglao. Featuring interviews with more than 50 Filipinos throughout the diaspora, Blood Debts explores debts beyond money.

•  PhilJay Solar and Jennifer Coliflores through PAMANA, Inc. launched a virtual college fair in Boston. Both also spearheaded the raising of the Philippine flag during the Filipino-American History Month of October with their local government.

•  The Bayanihan Collective, a project by Krystle Canare, aims to connect individuals to services and supports during times of transition, building the capacity of organizations and business, and uplifting the power of bayanihan, or communal spirit, to strengthen the health and well-being of Filipinos in the diaspora. The Bayanihan Collective achieved Limited Liability Company (LLC) status in March 2020 with plans to launch online in early 2021.

•  Arts & Culture Commissioner for Daly City Joanne Boston, was a Lighting Talk Speaker at the Pinayista Summit this year.

•  In 2020, the Kawayan Collective by Ray Villanueva leveraged its bamboo materials to increase hospital bed capacity in the towns of two major towns of Negros Oriental, Bayawan and Bais City.

•  Filipino Films Focus, a project by Louella Rose Cabalona, brings Filipino and Filipino American stories into local cinemas and popular film festivals in Chicagoland and beyond. In the last two years, the project collectively raised over $6K for FYLPRO, and recently featured FYLPRO Alumnus Jhett Tolentino - Co-Producer of Lingua Franca in a live virtual event following its purchase and official Netflix release in August 2020.

•  The Filipino Dual Citizenship Initiative (FADCI) continues to build on its past successful series of informational series in New York led by Rachelle Ocampo and Edward Santos and in Chicago by Louella Cabalona, Julien Buenaventura, Abbey Eusebio and Jan Paul Ferrer and is gearing up for another series of information sessions leading up to the 2022 elections.