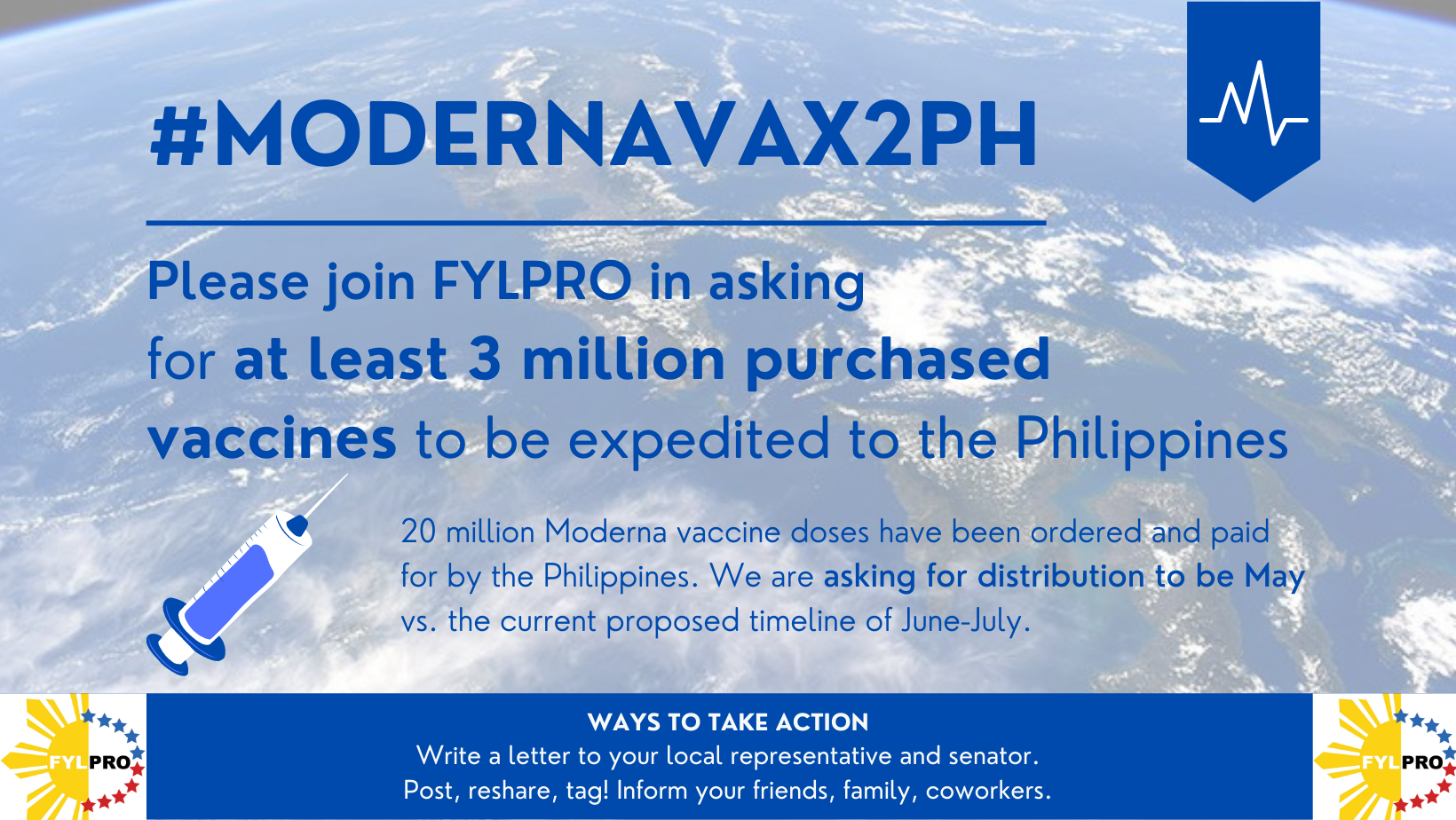 FYLPRO Calls on U.S. Government to Expedite Release of Initial Batch of COVID-19 Vaccines Purchased by the Philippines

As an organization committed to a thriving future for the Filipino people built upon the strength of our Filipino identity, global community, and connections with the Philippines, the Filipino Young Leaders Program (FYLPRO) appeals to the U.S. government for humanitarian assistance in equipping public health officials in the Philippines with an essential tool for controlling the devastation wrought by the novel coronavirus, namely the expedited release of 3 million COVID-19 vaccine doses already purchased by the government of the Philippines.

The COVID-19 pandemic has hit the Philippines especially hard, and as of this moment, hospitals there are at capacity and there is a dire need for therapeutics, ventilators, preventive education, PPE, disinfection protocols, and of course, vaccines. Like many countries, the Philippines has arranged for its people to secure access to various COVID-19 vaccines being manufactured by companies across the globe, including an order of 20 million doses from Moderna, Inc. that has already been paid for in full by the Philippines. While the initial expectation was for these vaccines to be delivered in July, the current coronavirus emergency highlights the importance of accelerating access to the doses as soon as possible. A reasonable proposal that has emerged calls for the immediate release of a small fraction of the Moderna purchase, namely 3 million doses. However, it has come to our attention that despite the sales transaction having been completed, the National Defense Production Act currently prevents U.S. companies from exporting any product until domestic requirements have been met, which according to White House projections would be around mid-May to June.

This public health situation further affects the wellbeing of many of the almost 5 million Filipino Americans in the United States with deep familial and cultural ties to the Philippines, not to mention the approximately 300,000 U.S. citizens residing in the latter. In light of these extraordinary circumstances, FYLPRO urges President Biden to use his executive authority to expedite the release of this initial batch of fully paid vaccines to save a significant number of lives in the Philippines upfront. So many personal tragedies can be averted if we act sooner rather than later. The numbers are staggering: as of April 16, the number of active COVID-19 cases in the Philippines hit an all-time record of 193,476, and in terms of both overall reported cases (926,052) and deaths (15,810) ranks, the country ranks second in all of Southeast Asia.

As we look ahead to the 75th anniversary of diplomatic ties between the U.S. and the Philippines this July (not to mention a shared history that stretches back even further) and having just commemorated the 79th anniversary of the Battle of Bataan earlier this month, we need not further elaborate on the strength of our common bonds spanning the vast Pacific. Nevertheless, we cannot help but highlight this relationship given the contemporaneous experiences of fellow U.S. allies. For example, during the last month Mexico received 2.7 unused AstraZeneca vaccine doses from the U.S., while Canada was shipped 1.5 million doses of the same on loan. By contrast, our Filipino American community, which includes the 4% of total U.S. nurses who have simultaneously made up 31.5% of COVID-19 related nurse deaths, looks on as their relatives in the Philippines, many of whom are economically supported by remittances from the Filipino diaspora, longingly wait for live-saving vaccines that are already spoken for by their government’s leaders.

“I am cautiously optimistic that we are seeing the light at the end of the tunnel with COVID-19 in the United States. In contrast, the Philippines is expected to be one of the last to recover from the pandemic in Southeast Asia; suffering one of the worst outbreaks in the region and its economy experiencing its worst drop since the end of World War II. I urge the Biden-Harris administration to consider the long-standing relationship of the two countries as allies and fast-track the delivery of Moderna vaccines ordered by the Philippines,” says Louella Cabalona, FYLPRO President.

FYLPRO applauds the administration’s swift, decisive, and evidence-based pandemic response efforts since President Biden took office. It is our sincere and concerned entreaty that the White House, in concert with relevant officials such as Secretary of State Antony Blinken and U.S. Agency for International Development (USAID) Acting Administrator Gloria Steele, apply its lawful authority in making the eminently reasonable decision to dispatch the 3 million Moderna doses being requested.

FYLPRO is also launching an online campaign to encourage its 84 alumni across the U.S. and the entire Filipino American community to call on both the majority and minority leaders on Capitol Hill for a non-partisan appeal to the U.S. Senate and House of Representatives.

Cabalona adds, “I’m hoping what we endeavor to do moves the needle in expediting the release of the vaccines to the Philippines. Getting shots sooner will save thousands of lives”.

About the Filipino Young Leaders Program (FYLPRO)
FILIPINO YOUNG LEADERS PROGRAM (FYLPRO) is a network of high performing, next-generation leaders who advance the Philippines and the  Filipino people through their advocacy and expertise in various industries.