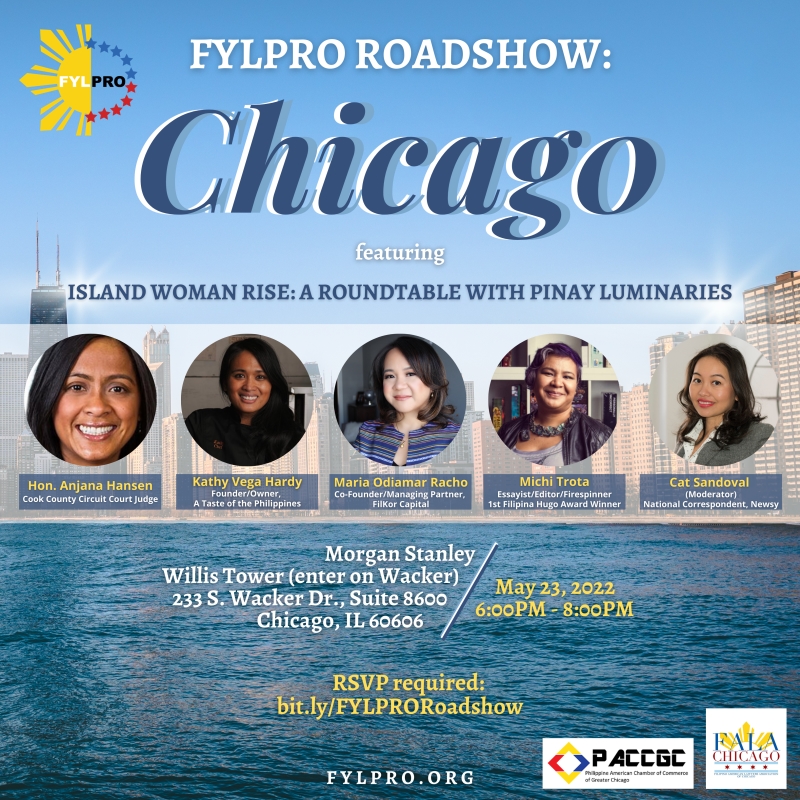 Join us for our first Q2 stops for FYLPRO’s Roadshow and find out what FYLPRO and Tayo have in store for 2022.

We are excited to present a candid Q&A session with a roundtable of Filipina American leaders blazing trails in entrepreneurship, law and politics, media, publishing, and the culinary arts. Open to all, we invite attendees from every professional and academic background to network and learn about a broad range of industries. Whether you are just starting your career, exploring passion projects on the side, or looking to make a complete pivot, here’s your chance to hear some real talk from an inspiring lineup of FilAms making moves. Come prepared with questions! (Scroll down for bios of our distinguished panelists)

Thank you to our venue host, Morgan Stanley and event partners: the Filipino American Lawyers Association of Chicago (FALA Chicago) and Philippine American Chamber of Commerce of Greater Chicago (PACCGC).

Additionally, we require proof of vaccination and strongly encourage masks when not eating or drinking. 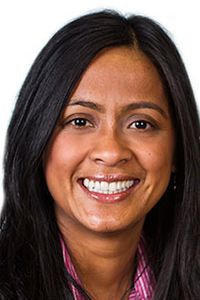 Born and raised in Rogers Park in Chicago, Anjana Hansen is the daughter of immigrants from India and the Philippines. Upon graduation from St. Norbert College, she attended The John Marshall Law School. She obtained her license to practice law in Illinois in 1998.

Anjana began her legal career with the Cook County State’s Attorney’s Office where she had the opportunity to be in several different divisions in criminal and in the civil division. From 2005-2009, Anjana was elected as the first Asian American Alderman for the City of Evanston’s 9th Ward. After 12 years, Anjana left the State’s Attorney’s Office to begin her own general practice of law. As part of her solo law practice, she was an Administrative Hearing Officer for the City of Evanston. After 4 years in private practice, Anjana was elected to the Circuit Court in Cook County in 2014. She was retained in 2020 and presides in District 2, Skokie. Also in 2020, Anjana spearheaded the Asian American Judges Association and is currently the President of the organization.

Alongside Anjana’s legal career, she has remained dedicated to serving her community. As a mother, she volunteers regularly at her children’s schools and has coached various sports.  Each year, Anjana organizes Bike the Ridge in Evanston, a free, family-friendly event, which allows bicyclists of all ages to ride down historic Ridge Avenue without the impediment of vehicular traffic. She served on the City of Evanston’s Community Development Block Grant Committee for 10 years and on the McGaw YMCA’s strategic planning committee for the Children’s Center. She has been an instructor for the Evanston Police Department’s Citizen’s Police Academy. Volunteering in the community is also a family affair as Anjana, along with her family, delivers meals for Meals on Wheels as well as provides meals for the homeless through Connections for the Homeless. Anjana also has spread her love of public service and civic involvement as a guest at various area elementary and high schools. She continues to live in the north suburbs, where she is raising her 3 children with her husband. 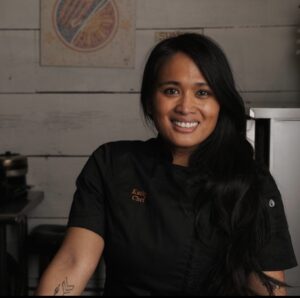 Kathy Vega Hardy was born in Quezon City, Metro Manila, Philippines. She was an accountant turned cook and started A Taste of the Philippines food truck in Denver in 2012. She gained popularity throughout the state and also competed 3 times in Food Network’s hit shows Cutthroat Kitchen (twice) and CHOPPED. She moved the business to Chicago in 2018 where she caters via corporate events and serves as a vendor at Daley Plaza City Markets. She’s also known for catering kamayan feasts. In the midst of the pandemic (July 2020), Vega Hardy opened a small restaurant inside the Chicago French Market. She recently celebrated 10 years in business. 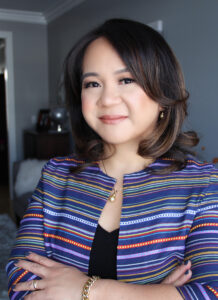 Maria Odiamar Racho is Co-founder and Managing Partner of FilKor Capital, a venture capital firm with a mission to empower resilient Asian Americans to build enduring companies. FilKor Capital was one of 2500 applicants to the VC Lab accelerator, and graduated in the top 10 of the cohort.

Maria is also Organizational Effectiveness Senior Manager at Allstate Corporation where she co-found two employee resource groups, Allstate Asian American Network (3AN) and the Intrapreneurs@Allstate (i@a). i@a started with five founders, has grown to over 700, and has become the corporation’s internal incubator running shark tanks and startup challenges.

Maria completed an Executive Master of Science in Organization Development at Pepperdine University where she is adjunct faculty. She is also a published researcher and speaker on Asian American leadership. Maria currently serves on the board of the Organization Development Network – Chicago (ODNC), and is a startup mentor at the Global Insurance Accelerator (GIA). In 2020, her leadership with an Asian American Small Business COVID-19 Relief Task Force helped catalyze the opening of an Illinois Small Business Development Center for the AAPI community.

Maria is married to her childhood sweetheart with two kids and an extended family the size of a small village. 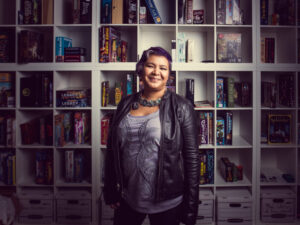 Michi Trota is a Chicago-based Filipina American writer/editor, communications & content development manager, community organizer, and firespinning geek. Michi is a five-time Hugo Award winner, British Fantasy Award winner, and the first Filipina to win a Hugo Award. She’s Editor-in-Chief of Science Fiction & Fantasy Writers of America (SFWA) and co-editor of the WisCon Chronicles Vol. 12 (Aqueduct Press) with Isabel Schechter. She’s the Senior Editor of Prism and was the first Managing Editor/Nonfiction Editor of the Hugo Award-winning and World Fantasy Award finalist Uncanny: A Magazine of Science Fiction and Fantasy (2014-2019). She’s a past president of the Chicago Nerd Social Club Board of Organizers and a resident fire performer/object manipulation artist with the Raks Geek performance troupe. Michi was featured in the 2016 Chicago Reader People Issue, the exhibit text writer for Worlds Beyond Here: Expanding the Universe of APA Science Fiction at the Wing Luke Museum in Seattle, WA, and was also a featured essayist in Invisible: An Anthology of Representation in SF/F (edited by Jim C. Hines).

Raised on a steady diet of 80s cartoons, anime, and classic sci-fi/fantasy literature and soundtracks, she’s almost been banned from playing Star Wars Trivial Pursuit with her friends, can quote from The Simpsons at the drop of a hat, never forgets to bag and board her comics, and refuses to acknowledge the existence of a fourth Indiana Jones movie. She loves Chicago and while she complains bitterly about the weather, she wouldn’t call any other city in the world home (well, except for maybe a tropical island in the Caribbean, but only for part of the year).

Discussions about geek culture, feminism, and food are guaranteed to get Michi talking for hours. She’s organized discussions and participated as a panelist at events such as the Chicago Humanities Festival, Chicago Wizard World, C2E2, and WisCon, been a guest lecturer at the University of Chicago and DePaul University, and has appeared in Bitch Media and on NPR.

Michi is also both a gourmet cook and a gourmand: she eats like a hobbit, loves food, and will geek out about it at the slightest provocation. In fact, she’s been told more than once that if she had a mutant superpower, it would be making people hungry just by talking about food. Especially if it has to do with chocolate or bacon. But mostly bacon. (Photo credit: © 2016 Bill Whitmire) 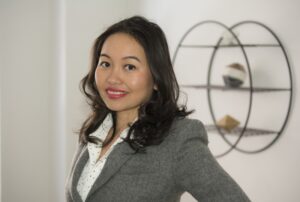 Cat Sandoval is a Newsy National Correspondent focused on stories involving diversity and inclusion, especially those spotlighting Asian Americans. Before joining Newsy in 2017, Cat owned a boutique production company in New York City whose clients included Mashable, the New York Post and the New York Daily News. She also created and hosted an NBC series called “Take Back,” with the aim of dispelling stereotypes about Asian Americans. Cat is a former president of the Asian American Journalists Association New York Chapter.