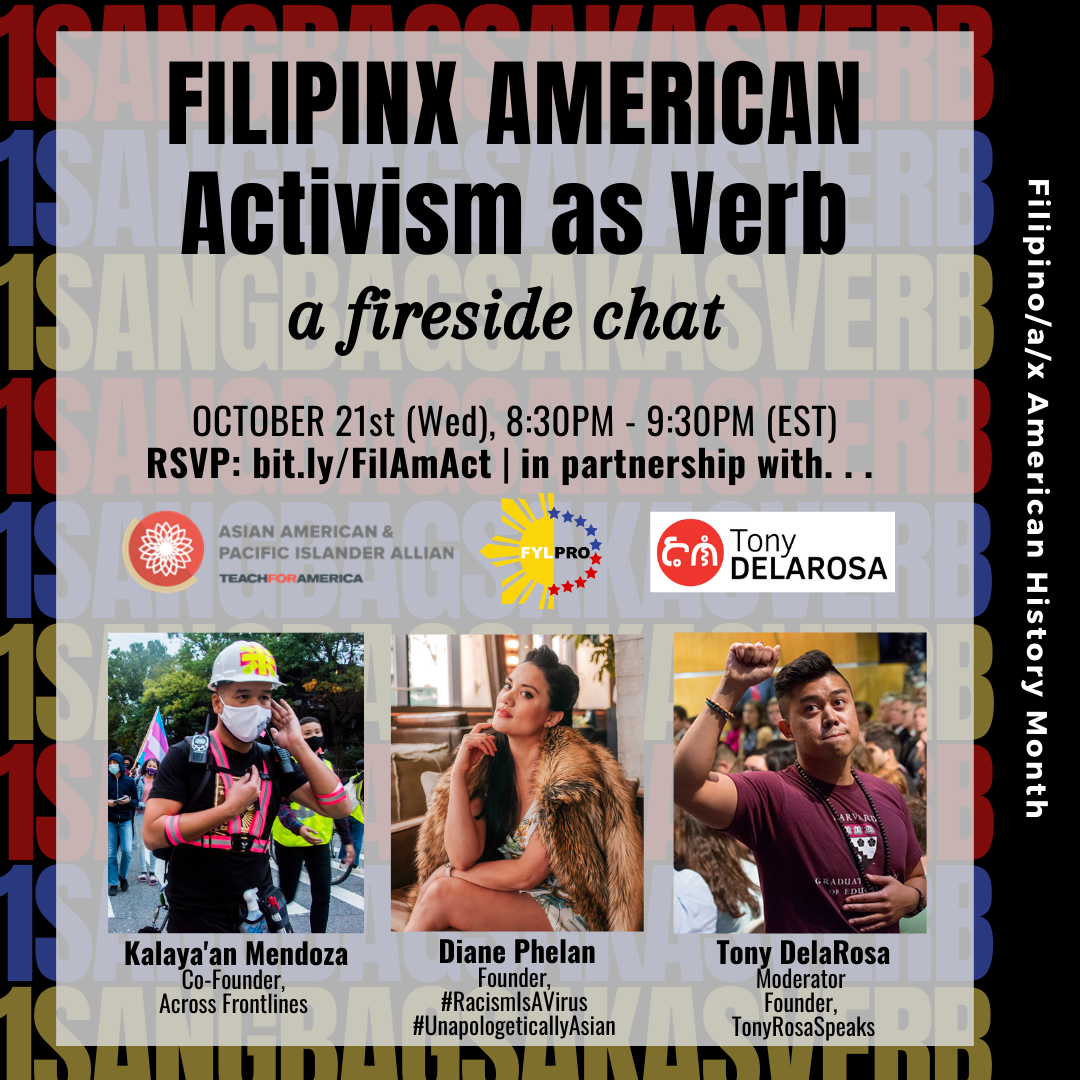 A fireside chat with Kalaya’an Mendoza, Diane Phelan, and Tony DelaRosa on the past, present, and future of FilAm Social Activism.

Join activists Tony DelaRosa (Founder of #IsangBagsakAsVerb), Kalaya’an Mendoza (Co-Founder of Across Frontlines), and Diane Phelan (Founder of the #RacismIsAVirus & #UnapologeticallyAsian campaigns) in a fireside chat celebrating the history of FilAm activism. This event was inspired by the Filipino American National History Society (FANHS).

Audience: Open to all!

• Participants will build awareness on Filipino/a/x American social activism. We’ll explore vital historical moments that either included or sparked FilAm activism, and what continues to move FilAm activism as a verb today.

• FilAm Participants will learn how to get involved in activism as it shows up in many different ways.

• Non-FilAm participants will learn how to help elevate the work of FilAm activists as allies and co-conspirators.

**Logistics: After RSVP-ing you will receive an email with the zoom link & password at least 1 business day prior to the event.**

Kalaya’an Mendoza [He/Him/Siya] resides on occupied Lenape territory. He is a Queer, Hard of Hearing Filipino American organizer and human rights activist who has been engaged in nonviolent civil resistance for the past two decades. His work is currently focused on voter protection, community defense and tactical safety and security training in the lead up and aftermath of the 2020 election. Learn more about his work on social media at @kalamendoza.

Diane Phelan is an actor, director and activist based in New York City. She is the founder of the #RacismIsaVirus campaign and #UnapologeticallyAsian, both aimed to activate and empower Asian Americans and redefine what it means to be American right now. Both orgs have been featured in the NYTimes, Reuters, Asia Journal and Next Shark. She has performed in lead roles on Broadway as well as national & international productions, most notably in School of Rock, West Side Story, & King and I. She is the founder for the Broadway Diversity Project. You can catch her starring in the new film MARRY HARRY currently streaming on Amazon.com. For more follow on insta: @DianicaPhelan

Tony DelaRosa (he / they / siya ) is an aspiring Anti-Racist/Bias/Colonial Educator, Motivational Speaker, Poet, & DEI Consultant. He has been featured in CNN, the Hechinger Report, NPR, Hyphen Magazine, and more! He founded a national youth spoken word poetry network called Pulse Poetry encompassing Indy, Boston, and Miami. It provides curriculum for kids to find their own voice through the intersections of arts, literacy, and liberatory conscious pedagogy. His work now focuses on cross-coalition building across lines of race and ethnicity through his educational series #IsangBagsakAsVerb. Learn more on social media @TonyRosaSpeaks